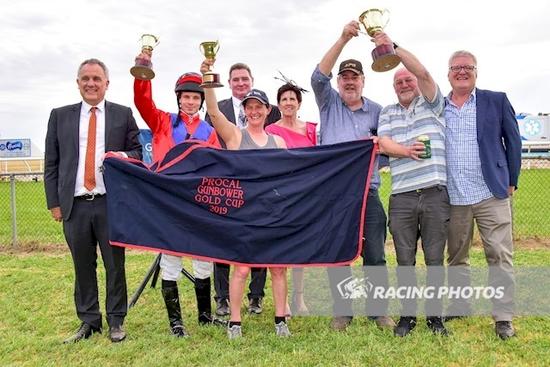 We didn't think that we would see Penny race again let alone be able to hold aloft another country cup. Especially the particular cup of Gunbower for a second time in 3 years. When Penny To Sell was entered in the Inglis sales it was a real feeling of sorrow to see her go unable to afford to purchase her ourselves and the reality that she was considered a mare of quality earnings we were quite devastated at having to see her go through the ring. Supreme Thoroughbreds were in charge of our girl on the day.We spent a lot of time down in their barn with her prior to her sale time just trying to say our goodbyes and accept that the curtain had drawn on her career with us. Turn the clock forward and a group of her previous owners were not ready to let her go either, purchasing Penny back and sending her back to our stable. After having a blow out at Moonee Valley over the far too short of a trip at 1200m Brian Park reported she was in fantastic order and there was no fear putting her up in trip. 8 days later on a very firm track carrying 60kg and a jockey in Sam Payne that had already won 3 races at Gunbower before the cup. Everything just came together and class took hold when Penny & Sam rolled around the leaders on straightening storming home for a strong victory. This mare is a treasure for all of us and has so many times picked everybody up when times have been tough. There is not one thing that she owes us and we are so indebted her her honesty. Thursday she will take on the Moe Cup where her new ownership group are locals looking to have a fun filled day. Penny will also have a go at the Kyneton Cup where we spent much of our career.