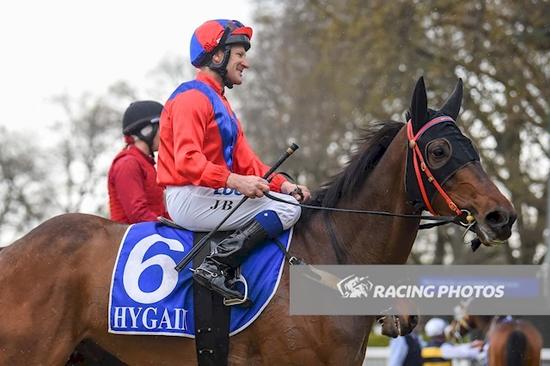 Raid The Cabinet or better known as Daddy to the stable, left the opposition off the bit at Kyneton last Friday. Returning back to the form we knew that he was capable. A strong effort from all our team and the genius of Sarah Jalim at Bendigo Equine Hospital. For the earlier part of his campaign Daddy had been uncharacteristically out of form falling flat at the crucial point of his races. We knew there had to be something going on but was unable to pinpoint exactly what that was until Sarah discovered that Daddy was suffering a virus that was depleting his red blood cells. After recovering from his virus we had him ready to rock and roll when on race day he encountered a foot abscess resulting in a scratching. Once again we put this behind us and headed to Bendigo very confident for Daddy to bounce back. He had different ideas bouncing around before the start in the barriers resulting in yet another scratching. For the team frustration was high but confidence in how well he was feeling was just as equal. The next attempt and resulting victory came at Kyneton. During the week he had a jump out where he wasn't pushed we just wanted to see him behave and take a little bit of over fresh edge off him. It did the trick with a lot of help from a quick decision by jockey Jason Baldock. Race plans were from his car park barrier were to take a quiet sit in behind the field and let him work home strong. When the gates opened this plan had to be abandoned as the field broke slowly and from gate 12 Raid The Cabinet was going to be left posted wide. Jason made a quick choice to let him roll forward and was able to get a very cheap lead with others believing he may compound as he had in earlier races this prep. Jason & Daddy took full advantage kicking away on the tun and making it impossible for the field to chase him down. A strong win and a welcome return to the winners stall. TAKE NOTE: Racing.com has recently visited our Bendigo stables for an upcoming story on Raid The Cabinet & his son who is also his brother Archie. Also Raid the Cabinet will take on the Avoca cup this Saturday