Local Mare Streets Ahead At Kyneton 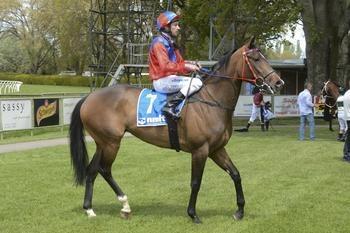 Local mare Streets ahead at Kyneton
Wednesday, 24 October 2012
Share on twitterShare on facebookShare on emailShare on printMore Sharing Services
Print  PDF
Locally prepared mare Piper Street filled out a long-priced double for Greta West Stud at Kyneton on Tuesday.  Making a belated debut as a spring five year-old, she jumped straight to the lead in the Racingnetwork Plate (1479m) and was in a race of her own from the half-mile.

Piper Street (5m King Of Prussia – Quatzar by Johann Quatz) won pulling up by four lengths for trainer Mick Sell and his wife Mel.  They race her in partnership with Dean Jeffries, Geraldine Phelan and Peter Roffe.

“She’s grown into a big, strong mare but it did take her a long time to mature,” Mel Sell said.  “And she was always picking up whatever bug was going around.  She’s got a future but we will take her through the classes without planning too far ahead.”

Piper Street was rated to perfection in front by stable apprentice Luke Londregan.  “She had won a jump-out last week and we expected her to go well first-up,” Sell continued.  “But we didn’t think she would beat them so easily!”

Piper Street paid $59 on Super TAB and the running double with Give Me Faith was worth $407.

Greta West resident King Of Prussia sired Piper Street who is named after the main road in Kyneton.  Her dam Quatzar is a half-sister to Prince Marauding who won a LR Ansett Stakes at Mornington and was runner-up to Drum in the 1996 G1 Oakleigh Plate.

Give Me Faith claimed the first leg of the Greta West double with a fast-finishing victory in the Schweppes Hcp (1218m).  He skirted the outside fence to score second-up after a three month spell.

Give Me Faith (4g Keep The Faith – Apple Express by Scenic) is trained by Terry and Karina O’Sullivan and had excuses first-up when the saddled shifted at Hamilton.  A $25,000 buy at the 2010 Inglis Melbourne Autumn yearling sale, he is raced by Valda Ballinger, Charlie Camera, Scott Cashill, Craig James, Tony Natale and Diane Rinaldi.

His dam Apple Express is a daughter of Apple Danish (Danehill) who won stakes races at Flemington, Randwick and Morphettville.

Keep The Faith (Sunday Silence) stands for a $4,400 service fee at Greta West Stud alongside King Of Prussia (Anabaa) who is priced at $2,750.